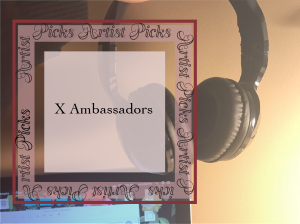 Finding new artists is a blast, but knowing where to start can be a struggle. Some bands have tons of tracks and it takes time to find the ones that will become your favorites. Having a starting point is always welcome.

X Ambassadors is an American rock band from Ithaca, New York, started in 2009. With multiple albums and plenty of singles, it’s hard to know where to start. Here are the top ten picks from X Ambassadors.

“Gorgeous” is a current, all-time favorite of mine. The lyrics are fantastic, as always, and the production is flawless. The vocals are what sets it apart from X Ambassador’s other tracks, though. Those high notes aren’t easy, but in this case greatly appreciated.

“Kerosene Dreams” is a tad different from the band’s other tracks. There is a more eerie vibe, though not far from their traditional style. The lyrics are flawless, as always, and certainly worth a read when you have a moment.

“Ahead Of Myself” is one of the band’s newest releases. The subject matter is out of the ordinary, which is certainly not to be overlooked. The lyrics, which is a trend in this post, are fantastic. They go out on a limb a bit with production, but it certainly paid off.

This track has a bit of a jazzy, swing vibe. It’s different for the band, but the lyrics and skilled production always pay off.

“Brother” is more production heavy, though the lyrics are nothing to scoff at. The beats are a bit heavier, but it works incredibly well with the content and, of course, the band does a great job in marrying the two.

This is the slow, sad track that X Ambassadors released. It’s relatively different from the rest of their releases, but it holds plenty of the same values- great lyrics and thoughtful beats.

This, along with “Brother,” is very production heavy. Though, as does “Brother,” it doesn’t skimp out on thoughtful lyrics.

“Torches” is another new release. Another track that is production heavy, but the lyric choice seems to be more thoughtful in comparison to the previous two picks that had the same characteristics.

“Jungle” is totally different from its co-releases. This western, almost country vocal vibe is paired with a production that hasn’t been seen before. The band went on a limb and it certainly paid off with this one.

Searching for a car with a new stereo but are having trouble getting an affordable auto loan? Check out autoloanswestcoast.com to begin your search!